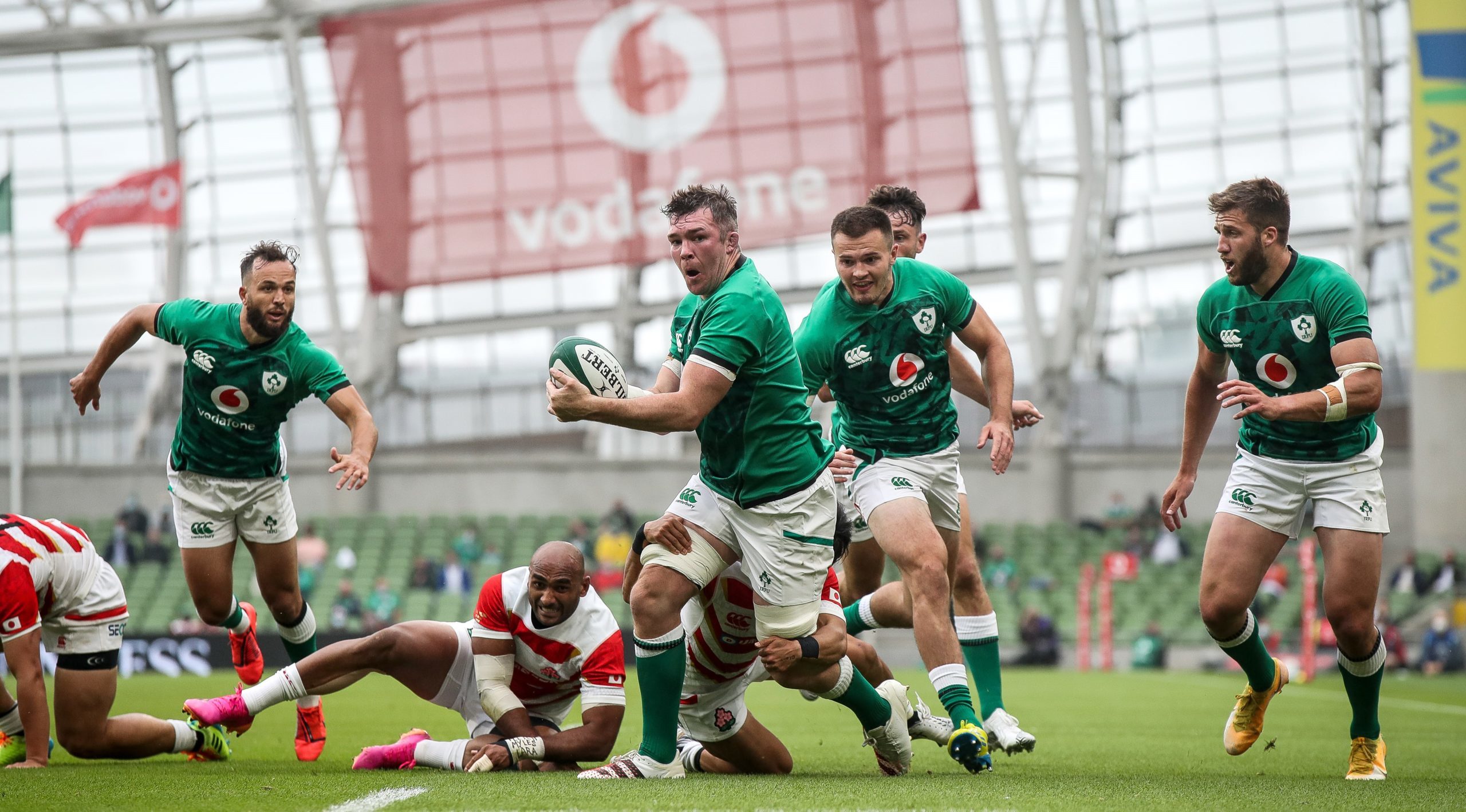 The Irish rugby team completed a successful Vodafone Summer Series at the Aviva Stadium with an excellent 71 – 10 win over the USA in front of 6,000 supporters. This was Irelands second successive victory after their defeat of Japan the previous week of a score line of 39 – 31.

These games offered Andy Farrell a terrific opportunity to blood new players with so many of his regular first choice squad having been promoted to the British and Irish Lions tour to South Africa. In total, there were nine new caps given out which included Gavin Coombes, Nick Timoney, Tom O’Toole, James Hume, Robert Baloucoune, Fineen Wycherley, Harry Byrne, Paul Boyle, and Caolin Blade.

The first game of the Vodafone Summer Series at the Aviva Stadium saw Ireland take on Japan for the first time since the 2019 Rugby World Cup – a game Japan won 19-12 – and Ireland found themselves trailing the Brave Blossoms on four occasions. Having edged back in front for half-time (19-17), Ireland showed the greater scoring power in the second half as tries from Josh van der Flier and Jacob Stockdale, coupled with two closing penalties from Joey Carbery, sealed a hard-fought victory. Giving his reaction afterwards, Irish captain James Ryan said: “I think what we learnt is that Test match rugby is never perfect. I think it has been a really good couple of weeks for this group.”

The game against the USA was another thrilling match for Irish rugby supporters which saw a huge number of trys scored for the home side. There have been highs and lows for Farrell and his troops during this period, but a run of five successive wins has made it a positive end to the season for Ireland. From this point of view, he felt it was mission accomplished, saying: “You’d never think that it was the end of a marathon of a season. For what these lads have been through, where do you start in that regard. I just said to them there in the changing rooms, all the staff have mentioned that you’d actually think it was the start of the season the way that they’ve gone about their business. It’s all credit to them.”

The Irish team will now have some much-deserved time off before returning to their provinces in a few weeks’ time to get started on pre-season training ahead of the 2021-2022 season. The next time the team will be back at the Aviva Stadium is expected to be the Autumn Internationals later this year. We are hopeful there will be increased attendance will allow for Official IRFU Corporate Hospitality to take place once again at the Aviva Stadium.

We are delighted to announce that the Autumn International fixtures will include three incredible fixtures against Japan, New Zealand, and Argentina. Ireland have great history against all three teams; having been beaten by Japan at the 2019 RWC, Ireland avenged that match with their recent victory. The All Blacks also beat the Irish team at the RWC 2019, but Ireland got the better of New Zealand on two previous occasions in their recent meetings. Finally, Argentina have gotten the better of Ireland at crucial World Cup games, but this Irish team will be confident they can beat a physical Los Pumas side.

We use cookies on our website to give you the most relevant experience by remembering your preferences and repeat visits. By clicking “Accept All”, you consent to the use of ALL the cookies. However, you may visit "Cookie Settings" to provide a controlled consent.
Cookie SettingsAccept All
Manage consent